Antibodies in less than 3 months 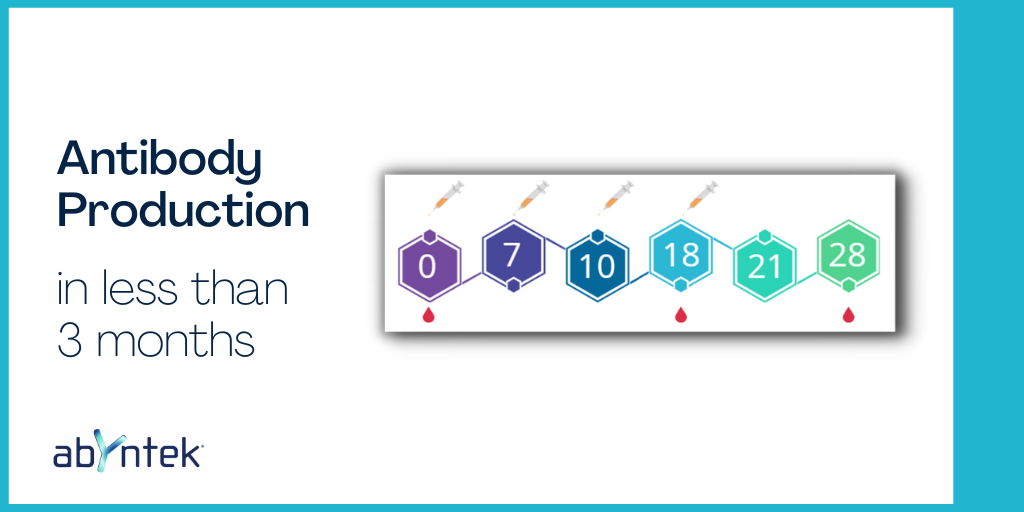 Antibodies are classically obtained by stimulating the immune system of an animal using proteins or peptides as the immunogen.

The ability to generate this immune response, depends on the characteristics of the immunogen itself, the immunization protocol or the animal species selected.

The classic protocols for antibody production are usually long. However, there are alternatives that offer excellent results in a shorter period of time, such as express protocols or recombinant antibodies.

We design and produce the reagent that best suits your research.

Our scientific team will assist you across all the process. Contact us!

The production of polyclonal antibodies involves an in vivo process, and normally takes about 90 days. During this period, the animal is immunized with an initial dose and several boosters. When the immunization period ends, the next step is the extraction and purification of the different antibodies that the animal has generated against the antigen used.

However, there are in vivo protocols for obtaining good quality polyclonal antibodies in less time.

Express protocols allow obtaining polyclonal antibodies in just 45 days. These rapid protocols are based on the following:

A thorough study of the antigen

First, it is necessary to determine the best protein areas as antigenic determinants. There are different algorithms that computer programs use when designing one or several antigenic peptides. Some concepts to take into account when opting for an express protocol are followings:

The effectiveness of the immune response depends on the distribution of the antigen to the lymphoid tissue. In express protocols, different routes of administration are often used, depending on the day of injection.

The choice of adjuvant

Adjuvants are substances that, when administered together with the antigen, accelerate, increase or prolong the immune response.

In vivo monoclonal production is longer in time and generally more expensive. This process consist of several steps:

All this protocol takes minimum 6 months.

This type of antibody is produced by cloning the genes of antibody´s variable region into a vector, which will later be introduced into the cells for the expression and production of the antibodies. Recombinant antibodies thus are obtained using in vitro techniques, instead of animal models.

One recombinant monoclonal antibody is the SCVF format or single-stranded variable fragments. These types of antibodies are produced easily and quickly, being obtained in half the time. The recombinant antibodies generated have a high affinity with the target, ensuring greater penetrability and less immunogenicity in the host.

Get some tips for monoclonal antibody production.