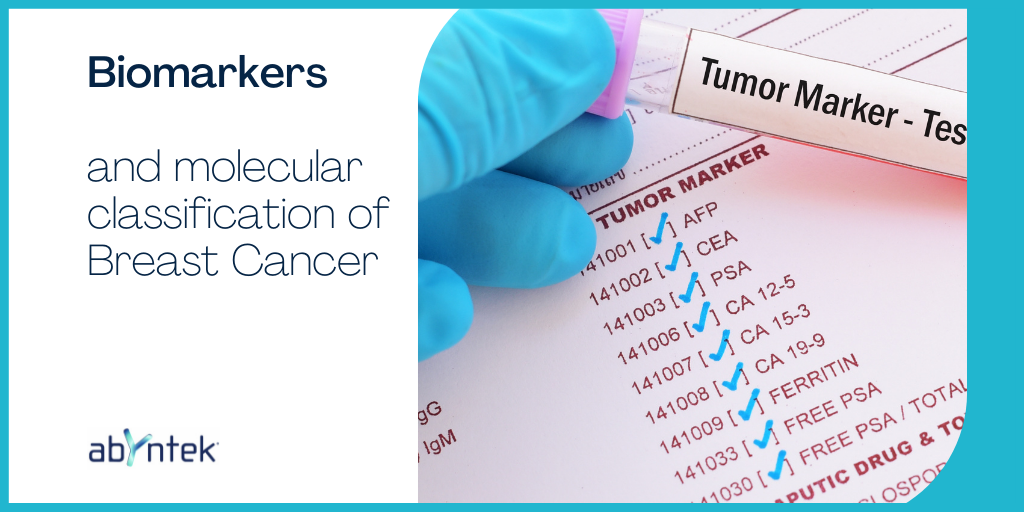 The World Health Organization defines a biomarker as any substance, structure or process that can be measured in the body or its products and influence or predict the incidence of outcome or disease´. In the context of cancer, a biomarker might measure the risk of developing certain cancer in a given tissue, or it might measure the risk of cancer progression or response to therapy.

In this post we review the main biomarkers that are taken into account for the molecular classification of Breast Cancer and the definition of subtypes.

Clinical relevance of biomarkers in cancer

In the last decade, the development of high throughput sequencing technologies as well as other advances in molecular biology has led to an increase in the number of studies focusing on the identification and validation of potentially clinically-useful biomarkers across different cancer types. Nevertheless, the ultimate goal of incorporating these biomarkers into routine clinical practice is not easily achieved.

It is estimated that only 0,1% of the reported biomarkers are successfully translated into the clinic (Goossens et al. 2015). It is crucial that candidate biomarkers can reliably and robustly be correlated with the clinical phenotype or the outcome of interest. To this end, the performance of the biomarkers should be evaluated in well-powered prospective trials, which is not always feasible due to financial difficulties or insufficient patient cohorts.

Alternatively, the validation of a biomarker´s clinical utility could also be stablished by incorporating data from samples in biobanks, analysing real-world clinical data or incorporating mathematical models.

In Breast Cancer, biomarker analysis is a common clinical practice. Biomarkers studied for the molecular classification of Breast Cancer and the definition of subtypes are the hormone receptors (estrogen and progesterone receptors), HER2 receptors and the nuclear protein Ki-67.

One of the most informative biomarkers is the estrogen receptor (ER)-alpha, which is expressed in 70-75% of invasive breast carcinomas. Tumours that express ER are largely dependent on estrogen supply for growth and survival. The expression of ER is a powerful predictive biomarker, and allows the selection of patients for endocrine therapy with selective estrogen receptor modulators (such tamoxifen) or aromatase inhibitors (AI).

The European Society for Medical Oncology (ESMO) recommends tamoxifen in pre-menopausal patients whereas both treatment options, tamoxifen or AI can be considered in post-menopausal patients. The status of ER expression is determined by immunohistochemistry (IHC) applied to the biopsied tissue and the cut-off to define a positive result is the presence of ≥1% of ER-positive tumour cells.

As the result of ER-signalling, the progesterone receptor (PGR) is upregulated, thus cells that overexpress ER also tend to show upregulation of PR, a member of the nuclear hormone receptor family of ligand-dependent transcription factors. Progesterone and estrogen can lead to the activation of PR resulting in the transcription of genes involved in cell survival and proliferation.

Along with the hormone receptors, the transmembrane receptor tyrosine kinase HER2 (Human Epidermal Growth Factor-2) is probably the most important prognostic and predictive biomarker in breast cancer. HER2 belongs to the Epidermal Growth Factor Receptors (EGFR) family, which mediate cell-signalling pathways such as mammalian target of Rapamycin (mTor) and mitogen-activated protein kinase (MAPKs) pathways, regulating cell proliferation and survival.

In breast cancer, the activity of HER2 is increased above basal level, usually as a consequence of gene amplification, and this leads to the stimulation of tumour growth. Its usefulness as a prognostic biomarker was first reported in 1987 and validated in subsequent studies.

HER2 positivity was associated with higher grades of disease recurrence and mortality. However, the outcome for these patients changed with the development of HER2-targeted therapies including such as trastuzumab. Trastuzumab, a humanized monoclonal antibody, targets the extracellular domain of HER2 blocking its activation. It is used as a monotherapy or in combination with chemotherapy in early stage or metastatic HER2-positive breast cancer.

The assessment of the HER2 status can be performed by either immunohistochemistry or in situ hybridization (ISH), the later allowing the assessment of HER2 copy number. When assessed by IHC, HER2 expression is graded from 0 to +3 based on intensity of the staining and percentage of positive cells. Scores 0 and +1 are considered HER2-negative and +2 and +3, HER2-positive.  When performing single-probe ISH, positivity is defined by examining the average HER2 copy number: if less than 4 it is considered HER2-negative.

The biomarkers above described are useful to classify Breast Cancer into four different subtypes: