BIOMOLECULES AND BIOMARKERS IN MELANOMA 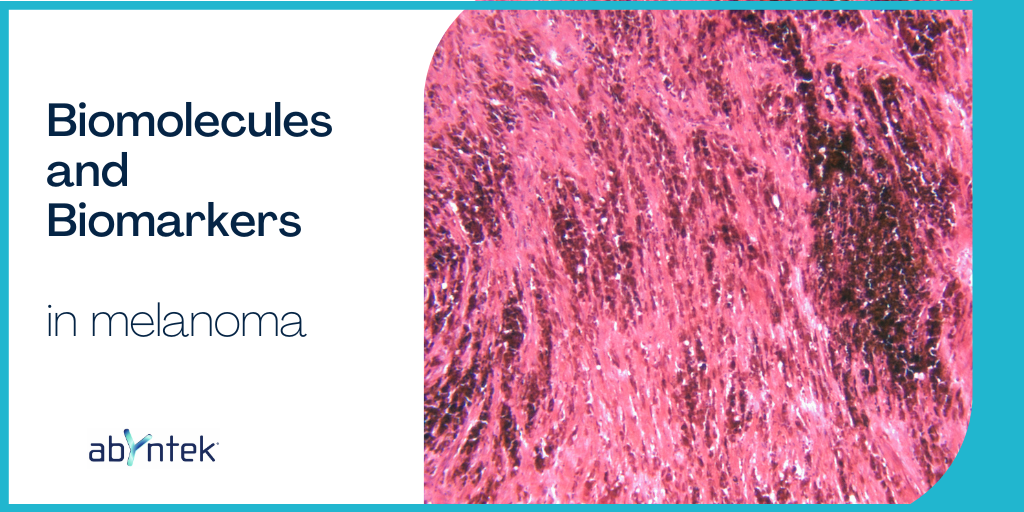 Melanoma is a type of skin cancer that develops in melanocytes starting when melanocytes begin to grow out of control. This cancer type can flourish anywhere on the skin, but they are more likely to start on the legs in women, whereas men are prone to develop it on chest and back. Additionally, the face and neck are other typical sites. The incidence of melanoma has risen dramatically over the past several decades.  Even though melanomas are less common than some other types of skin cancers, it is more dangerous because it may easily spread to other parts of the body.

Metastatic melanoma commonly metastasizes to sites not frequently seen with other cancers, involving multiple organs and systems. The most commonly metastatic organs are lymph nodes, lungs, liver, brain and gastrointestinal tract. Several studies provide evidence that the primary melanoma lesion location is predictive of the pattern of metastatic disease. Lower extremity primary lesions have the highest rates of abdominopelvicmetastases. Whereas, ocular and head and neck melanomas have a preference for the liver.

Accordingly, early detection facilitates timely treatment of localized disease, which is particularly of importance in this cancer type. Thus, it is strongly recommended to explore other potential affected areas which could evolve in metastasis in the future.

Concerning melanoma, biomarkers are mainly used in diagnosis to differentiate between benign and malignant lesions and to distinguish melanoma from other types of neoplasms, e.g., sarcoma. They are also highly helpful in prognosis, and to determine if dissemination has occurred.

A wide variety of molecular biomarkers for melanoma have been described. Here are presented some of the most predominant melanoma markers in patients. They are related to the MAPK/ERK pathway (Figure 1). Mutations in the MAPK/ERK pathway (Figure 1), an important mitogenic signaling cascade, can lead to uncontrolled cell growth. Several subtypes of melanoma demonstrate mutations in BRAF, a gene encoding one of the important protein constituents of this pathway. In melanoma with such mutations, small inhibitor molecule therapies targeting BRAF/MEK pathway have demonstrated a high efficacy.

Thus, controlling this pathway might be a key for disease progression, treatment success, or even diagnosis. Some of MAPK/ERK pathway biomarkers are here described.

RAC1 is a small GTP-binding protein. It plays an important role in malignant tumor proliferation and metastasis. The most common mutation in RAC1 gene is a change in codon 20 that causes a gain of function. This mutation produces a constant activation of the MAPK signaling pathway (Figure 1), increasing the proliferation of melanoma cells.

The NF1 is a tumor suppressor protein that inhibits the activity of the NRAS oncogene. The lack of NF1 leads to increased activity of the NRAS protein, and thus the activation of both the MAPK pathway and the PI3K/AKT pathways. Mutations in NF1 and BRAF may limit the effectiveness of the treatment with both pathways’ inhibitors.

PTEN is a tumor suppressor protein involved in PI3K/AKT signaling pathway. When the MAPK pathway is inhibited by BRAF/MEK inhibitors, the PI3K/AKT pathway can take over this function. Thus, this pathway may be an alternative to MAPK inhibition, in case of resistance development.

CDKN2A gene encodes two proteins, p16INK4a and ARF. Changes in this gene, especially deletions, usually lead to a simultaneous impairment of both the p53 pathway (via the ARF protein) and the RB pathway (via the p16INK4a protein). This, may have a potential impact on the sensitivity of melanoma cells to targeted therapy.

Melanoma diagnosis is commonly done by image techniques, being computed tomography the gold standard. Additionally, immunohistochemistry may help to confirm the final diagnosis.

Immunohistochemical staining for molecular markers represents a valuable test for all cancer stages. Immunocytochemistry can be used for the diagnosis of melanoma, as well as in staging, evaluating prognosis, establishing the treatment and in predicting the recurrence of the disease. These procedures include cell signaling, cell differentiation, cell adhesion and apoptosis. The histological features of melanomas imitate those of lymphomas, sarcomas, neuroendocrine tumors and Merkel cell carcinomas. They express epithelial cytokeratin and endothelial markers. Here, some specific biomarkers associated with malignant melanoma, as well as the staging of the malignancy, are discussed as important prognostic factors.

S100 biomarker is a protein used in the evaluation of low degree differentiated tumors. For melanoma, it has almost 100% sensitivity. This protein is involved in cellular division, growth and proliferation, and also in calcium metabolism, protein phosphorylation and protein secretion.

Ki67 is a protein involved in cell cycle control. Anti-Ki67 specific antibody is used to detect a nuclear antigen only present in tissues with a high cellular proliferation rate, normally absent in normal tissues. The level of Ki67 is closely related to cell proliferation rate. Moreover, the expression of Ki67 also gives information about the evolution of the disease. A higher level of Ki67 is associated with thicker tumors and, consequently, with less favorable prognosis for the patients.

HMB‑45, recognizes Pmel17, a melanosomal glycoprotein involved in the synthesis of the melanosomal fibrils and in the process of evolution from stage I pre‑melanosomes to stage II. The sensitivity and specificity of this biomarker in malignant melanoma diagnosis rises to 95% and 100% respectively. The level of HMB‑45 staining gives information about the degree of cellular atypia.

Melan A, or MART‑1, is a protein used as a histopathological marker for detecting tumors derived from melanocytic precursors.  It is highly sensitive for melanoma, but not specific for this cancer type, as it may also be found in other tumors with melanocytic origin.

Some of these immune-strategies are based on antibodies that target cancer immune checkpoint inhibitors. The first FDA approved drug for melanoma treatment was a BRAF protein inhibitor. BRAF is a protein kinase involved in signaling pathways (MAPK/ERK), mutated in up to 60% of melanoma patients. The most frequent mutation is V600E.

The MAPK/ERK pathway is a fundamental intracellular signaling pathway that plays a central role in cellular proliferation, differentiation, apoptosis and survival. To reverse the mutated effect of this pathway, the inhibitors selectively bind to the mutated kinases and inhibit their activity leading to decreased cell proliferation, cell cycle arrest, and induction of apoptosis.

Here, some antibodies and targets for immunotherapy development are described.

PD-1 is a CD28 family transmembrane receptor normally expressed in CD4+ and CD8+ lymphocytes. It acts as immunosupressor molecule, inhibiting a self-immune response. PD-1 has 2 ligands L1 and L2, which are expressed on tumor cell surfaced. They normally bind Tcell´s PD1 receptor, inactivating the receptor and blocking Tcell. Thus, growth factors and survival molecules secretion is impeded. In both cases, this metabolic pathway might be intervened by blocking the ligand or the receptor.

Although these therapies seem promising and many patients take advantage of them, not all cancer patients do respond to the treatment. Additionally, resistance might occur, maybe due to the tumor plasticity. Therefore, predictive biomarkers are of importance to follow up disease progression and would allow for better personalization of the treatment.

At Abyntek we offer researchers a wide range of markers and products for melanoma research. Do not hesitate to contact us.