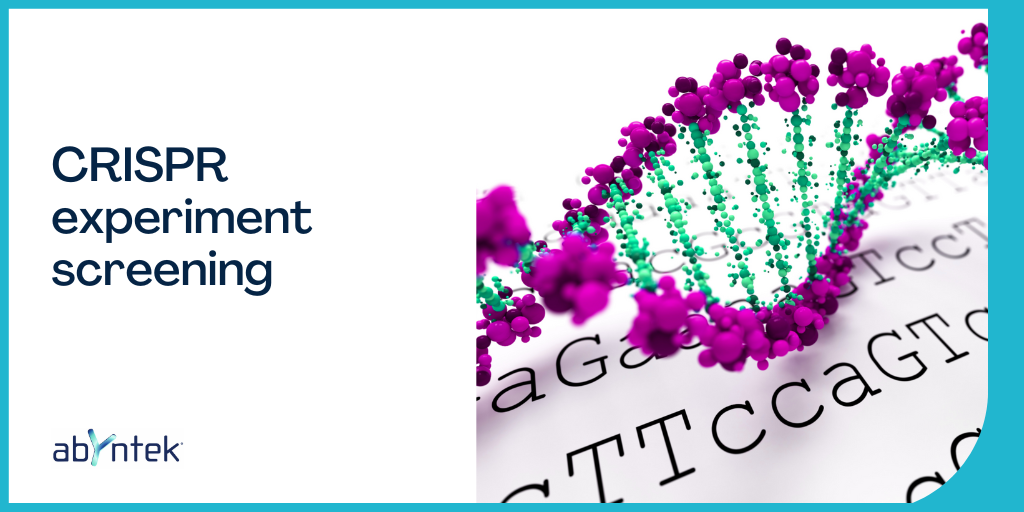 CRISPR-Cas technology use is wide­spread in experimental and applied research due to its precision and ease of use for editing cells, tissues and whole organisms. In fact, CRISPR system has become the most favorite molecular biology laboratory genome editing tool. Once the CRISPR experiment is finished, we should verify whether it has really been effective. Therefore, it is mandatory to check if Cas9 has already cut the DNA, and highly recommended to analyze where. This will inform us that the CRISPR model that has been generated is correct and the desired gene has been modified.

Abyntek provides an extensive catalogue and custom products validated by The Broad Institute of MIT and Harvard ensuring the best quality service. Our experienced scientific team will guide you, boosting your research to another level.

Screening the effectiveness of CRISPR model

There are different ways to check that the target gene has been appropriately modified. An experiment is considered successful when the target DNA has been cut only at the designed point, introducing a mutation that produces a change in the expression of the target gene.

Here a screening workflow to follow when analyzing a CRISPR experiment is presented:

1. Determine if a significant number of cells have been edited out of the mixed population set. One of the most widely use assays is endonuclease digestion.

2. Isolate cells that have been efficiently edited. This step, may be done using FACS (Fluorescence-Activated Cell Sorting), if fluorescence has been included in the vector. It allows the separation and isolation of edited cells.

In this technique, the modified sequence of interest is amplified by PCR, using primers that flank the specific region. Subsequently, the PCR products are denatured and reannealed. In areas where Cas9 has already cut, heteroduplexes are produced.

The PCR products are then digested with an enzyme capable of recognizing heteroduplexes and cutting DNA, such as T7 endonuclease. Finally, the products are visualized in an agarose gel, allowing to distinguish fragments that have been cut from those that have not. The fact that the nuclease enzyme has cut the DNA means that Cas 9 has cut the target sequence.

This technique for CRISPR experiment screening is simple and inexpensive. Furthermore, depending on the intensity of the band, the % of mutated cells can be determined. On the other hand, some computer tools for the design of CRISPR guides offer the sequences to design PCR primers.

However, this technique does not recognize single nucleotide modifications, nor allelic discrimination.

It is mostly used to analyze individual clones. To do this, the target region is amplified by PCR. Subsequently, the amplicon is cloned into a vector. Thus, each vector will carry only one copy of the target gene. It is considered the gold standard. However, it is expensive, since to determine the sequences of all copies of the gene it is necessary to analyze several colonies.

An alternative may be to directly sequence the amplicons. However, it also has drawbacks, such as alleles with different sequences (heterozygotes) can give rise to multiple bands in the chromatogram, making it very difficult to differentiate. On the other hand, there are programs that help decode this information.

This technique can be used to analyze both the mixed population and clones of cell lines. There are several CRISPR-specific programs that make it easy to analyze the results.

This method not only allows us to determine which alleles were modified, it also allows us to find out exactly which indels have been generated (in the case of a KO experiment), if off-target effects have occurred; and also whether the population is truly monoclonal.

This assay is useful for checking whether cells express the protein that has been modified. An antibody linked to a molecule that reveals the presence of the protein is used.

however, there are cases in which the mutation can affect the functionality of the protein and not its expression. In this case, as the protein is being produced, it would be detected, although in reality the objective has been achieved, which is that it is not functional.

These are some of the most common methods by which the success of a CRISPR experiment can be analyzed.

At Abyntek Biopharma, we have antibodies to perform WB, T7 endonuclease assay, and also a sequencing service, to make easy CRISPR experiment validation, in the way that works best for you.

Do you need any help?

Contact us filling this form or sending an email to info@abyntek.com.

We will be pleased to assist you!