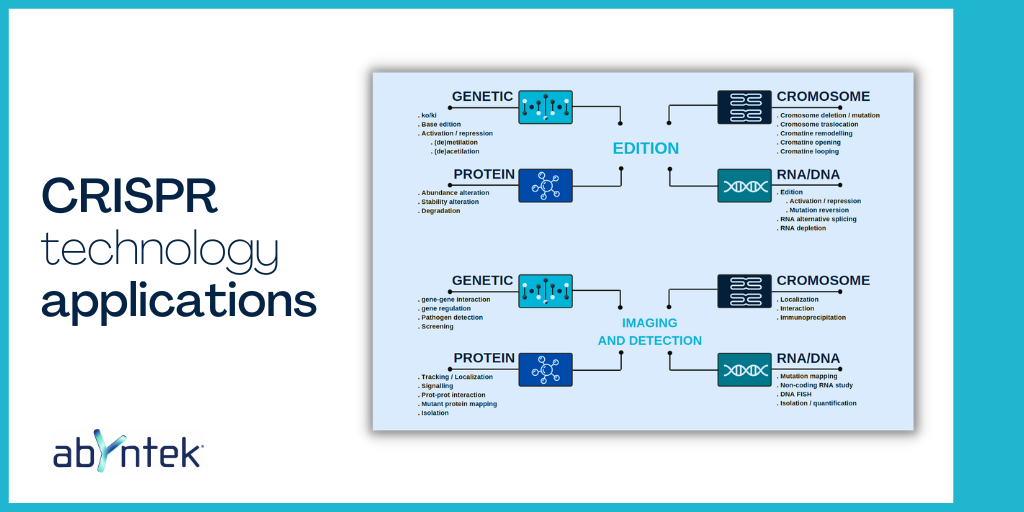 From 2012 CRISPR-Cas system has become the most favorite molecular biology laboratory genome editing tool. This is due to its precision and ease of use for editing cells, tissues and whole organisms. Thus, CRISPR-Cas technology use is wide­spread in experimental and applied research.

In recent years, potent tools for genome manipulation in animals, plants and microorganisms based on CRISPR–Cas9 have developed. We have already talked about what is CRISPR and how it works in previous posts: 5 key questions about CRISPR technology, how to avoid off-target events in CRISPR experiments and how to design guides for CRISPR.

Abyntek brings CRISPR technology directly to your lab, accompanying you throughout the entire process.

Here, some of CRISPR-Cas applications are presented. However, more and more uses arise mostly every day.

CRISPR-Cas9 system is known worldwide as a genome editing tool. Cas9 cuts double stranded DNA to generate a break that the host cell machinery will repair.

There are 2 repair mechanisms, both generating mutation introduction, non-homologous end-joining (NHEJ) or homology-directed repair (HDR). NHEJ produces small insertions or deletions at the cleavage site, named indels. While HDR uses a DNA template to replace the targeted allele with an alternative sequence by recombination.

There are other DNA repair pathways such as single-strand annealing, alternative end joining, microhomology-mediated joining, mismatch and base- and nucleotide-excision repair.

The CRISPR-Cas system has the potential to be used to regulate endogenous gene expression, including both transcrip­tional and epigenetic regulation.

For this purpose, deactivated variants of Cas9 have been developed by introducing two point mutations. These mutations deactivate Cas9 DNA cleavage activity, but does not affect the binding one. This cleavage inactive Cas9 was called dead Cas9 (dCas9).

Then, by fusing transcriptional activators or repressors to dCas9, the CRISPR- dCas9 system can be used to activate or inhibit transcription of target genes. Additionally, it allows simultaneous manipulation of multiple genes within a cell.

Base and prime editing systems

One of the latest CRISPR uses is base and prime editing. Both, enable precise nucleotide substitutions in a programmable manner, without producing a DBS and requiring a donor template.

DNA base editors are formed by 2 components, a Cas protein and a single-stranded DNA modifying enzyme. Two classes of DNA base-editors (BE) have been described: cytosine base-editors (CBE) and adenine base-editors (ABE). They are able to introduce C→T, T→C, A→G, and G→A transition mutations.

However, base editors had a major limitation. They are not able to generate precise base edits beyond the four mentioned transition mutations. To overcome this shortcomings, prime edition tools were developed. They can mediate targeted insertions, deletions and all 12 types of base substitutions.

In addition to editing DNA, CRISPR-Cas systems can also edit RNA. CRISPR-Cas13 systems contain a single RNA-guided Cas13 protein with ribonuclease activity, which can bind to target single-stranded RNA (ssRNA) and specifically break it. Based on Cas13, 2 RNA editing systems have been developed, by fusing catalytically inactivated Cas13 (dCas13) with the adenine/cytidine deaminase domain of ADAR2 (adenosine deaminase acting on RNA type 2). The first one is REPAIR system, which enables A-G replacement. On the other hand, RESCUE system enables C-U replacement.

Compared with DNA editing, RNA editing has the advantages of high efficiency and high specificity. Additionally, it can make temporary, reversible genetic edits to the genome.

Besides genome editing and regulation applications, CRISPR/Cas technology has been recently engineered for the visualization of endogenous genomic elements in living cells.

Live Imaging of DNA/RNA with CRISPR/Cas

DNA visualization is an important application in understanding a variety of cellular processes, such as replication, transcription, and recombination, and the interactions between DNA and associated proteins and RNA.

dCas9 enables also the fusion of fluorophores. This allows sequence-specific visualization of DNA and a dynamic observation of chromatin organization throughout the cell cycle. In addition to live DNA imaging, the CRISPR/Cas9 system can be used for live RNA imaging as well. Modifications to the gRNA sequence allow for mRNA recognition and tracking.

Chromatin immunoprecipitation (CHiP) is a method used for the characterization of chromatin-associated proteins and RNAs. Modifications to the CRISPR/Cas9 system allow for flexible targeting and isolation of these genomic regions. A nuclear localization signal and epitope tag can be introduced into dCas9 to create a DNA-binding protein that can be targeted by CRISPR guide RNAs.

The CRISPR/Cas9-chromatin complex can then be purified following traditional chromatin immunoprecipitation (CHiP) techniques, which uses antibodies. This adapted method only needs a single antibody against the tagged-Cas9 protein for large scale purifications. While traditions CHiP requires the use of multiple antibodies against each DNA-binding protein.

Specific and rapid recognition of desired nucleic acids based on CRISPR/Cas technology is possible. This technique combines nucleic acid preamplification with CRISPR–Cas enzymology.

They are based on other Cas enzymes, different from Cas9. These are, Cas13 and Cas12. The one using Cas13 is commonly known as SHERLOCK (Specific High Sensitivity Enzymatic Reporter UnLOCK- ing). It is composed of Cas13a, sgRNA targeting specific RNA sequences and fluorescent RNA reporters. After Cas13a protein recognizes and cleaves the target RNA, it will cut the report RNA and release the detectable fluorescence signal, thus identifying the target sequence. This method is used to detect virus, or distinguish pathogenic bacteria.

In addition to Cas13, Doudna et al. developed a nucleic acid detection system based on Cas12a, named DETECTR (DNA endonuclease-targeted CRISPR trans-reporter). This method depends on the collateral activity of Cas12a protein which degrades all adjacent DNA molecules after recognizing the target RNA. The DNA degradation releases fluorophores and results in stable and strong fluorescent signal detected by a fluorimeter. Additionally, DETECTR has been combined with an isothermal preamplification step to enrich target sequences.

SHERLOCK and DETECTR diagnostic tools are highly sensitive and specific probes compared to traditional PCR-based methods. Moreover, they do not require sophisticated equipment and have a lower estimated cost.

CRISPR-Cas9 system enables genome-wide high-throughput screening. CRISPR screening is a large-scale experimental approach which facilitates the discovery of genetic sequences related to specific function or phenotype. It exploits libraries comprising tons of sgRNAs used to identify genes involved in a particular phenotype. This type of screening might be use not only for functional and essential genes, but also for non-coding sequences.

At present, scientists have constructed human and mouse genome-wide sgRNA libraries, and they have been increasingly improved according to different requirements.

Abyntek provides an extensive catalogue and custom products validated by The Broad Institute of MIT and Harvard ensuring the best quality service. Our experienced scientific team will guide you, boosting your research to another level.

Do you need any help? Contact us filling this form or sending an email to info@abyntek.com. We will be pleased to assist you!