How to get a custom monoclonal antibody? 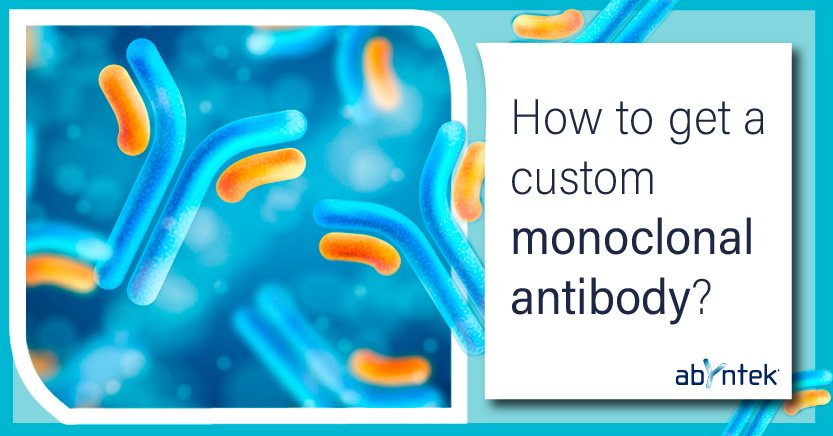 · At Abyntek, we carry out highly complex projects to find the bioreagents, antibodies or proteins our clients need

· Dr. Giraldo’s research group was able to publish an article in Scientific Reports (Nature) after we produced the monoclonal antibody they required

As of the very first contact with our clients, we are aware that even the smallest requirement is of paramount importance to complete a successful project together. We have experience in all kinds of scenarios requiring antibodies for research development. At Abyntek, we have more than two million product references and can carry out a custom search for you. Click here and find out how.

A real project that required developing and producing an extremely specific monoclonal antibody will be analysed as a practical example. In addition, that project had to distinguish amyloid conformation. Compared to conformational epitopes, antibodies are generally much more difficult to obtain than linear epitopes because, once animals are inoculated with the antigen of interest, antibodies are processed, losing their original conformation.

As well, there is a variety of scenarios in which we are entrusted the production of custom antibodies. It might be that a specific reference is not available in the market, or those that are may not meet a specific need. Also, a high reagent volume may be necessary, or the project findings may require protection, for example.

In this success story, we found a custom monoclonal antibody for our client, Dr. Rafael Giraldo, a researcher at the Microbial Biotechnology Department of the Spanish National Centre for Biotechnology (CNB-CSIC). Undoubtedly, it was one of the major challenges we have taken on, and obviously we were excited about the project. As a result, we obtained a conformational monoclonal antibody of great value for Dr. Giraldo’s team, enabling both the publication of an article in Scientific Reports (Nature) about its use in in vitro amyloidogenesis trials and its application in their subsequent daily research initiatives.

Dr. Giraldo himself sent us the following message expressing his gratitude for our involvement: “The monoclonal antibody that Abyntek developed for our team posed a difficult challenge since it was specific to a particular antigen conformation. It is a fundamental high-quality tool in our current research.”

To provide a clear understanding of how Abyntek works, we have answered the main questions arising from such a complex case:

What is the supplier-client relationship workflow?

The first step is to gather scientific information that is relevant to the project. The client provides information about the intended use of the antibody, the source of the antigen (human, mouse, rat…) and its potential toxicity. In some cases, the immunisation antigen is provided to us directly. However, its design and preparation are usually a stage of the project.

Particularly, if a peptide is used as immunogen, it is essential to previously assess its antigenicity on the basis of different parameters such as hydrophobicity and peptide sequence extension, presence of secondary structures and domains, among others. Upon consideration of this assessment, we agree with the client on the best antigen option to use.

Then, the immunisation protocol is implemented, and the efficiency of the resulting immune response is assessed. The next step is to send the report together with several samples of the resulting antiserum for the client to assess and decide on the sample to be used for monoclonal antibody development. After fusing the selected B lymphocytes with murine myeloma cells, hybridoma supernatants are assessed by both our technical team and the client, who finally decides the base hybridoma for antibody subcloning and purifying.

What is the most complex aspect of this type of project?

The development of antibodies that specifically and preferentially recognise protein oligomers against their corresponding monomeric or amyloid forms is highly useful in diagnostic and therapeutic applications in diseases characterised by protein misfolding, such as Alzheimer’s or Parkinson’s. However, such development is particularly complex because the relative abundance of oligomers is low in comparison with other forms, which complicates their purification and characterisation. In this project, an insoluble RepA aggregate was used as an immunogen, and all four mice that were immunised developed a satisfactory immune response.

The client chose the mouse in which the serum caused the best reactivity for myeloma cell fusion. The key to success for this project was a differential screening to select antibodies that preferentially detected the RepA protein as an aggregate instead of the monomeric form. It was also essential to use an insoluble RepA aggregate stable enough for in vivo use as an immunogen.

How important was Abyntek’s participation in the project?

Dr. Giraldo’s team investigates the RepA-WH1 protein, which recapitulates the behaviour of certain human proteinopathies in bacteria, which is characterised by the presence of amyloid or protein aggregates. In particular, RepA-WH1 binding to DNA triggers the interaction of several of these molecules with each other, leading to oligomer formation. They can structurally reorganise and form cytotoxic amyloid fibres.

B3h7, the monoclonal antibody produced together with Dr. Giraldo, recognises a conformational epitope present in the protein oligomeric state but not in the amyloid fibres. That is, it is specific for the pre-amyloid stage of RepA-WH1 and, therefore, a very useful tool to conduct research on the molecular mechanisms that regulate early stages in amyloid formation. Its use allows researchers to demonstrate that these oligomers are generated close to the nuclear region to subsequently form amyloid fibres in the cytoplasm.

Antibodies capable of distinguishing between oligomers and larger amyloid aggregates are of especial interest, not only because they are useful in basic science but also because of their potential as diagnostic tools or possible therapeutic applications. In fact, Dr. Giraldo’s article shows that, in specific experimental situations, the B3h7 antibody inhibits amyloid fibre formation in vitro, revealing that oligomers are essential intermediates in amyloid formation.

What is the timeline for such a project?

The timeline for the development of a monoclonal antibody is usually 23-29 weeks, including the antigen synthesis stage. The project is carried out in stages, so that the client is aware of the progress and can participate in the decision-making process. In the event of setbacks, such as an insufficient immune response, the deadline could be extended. However, if the client supplies the immunisation antigen directly, the timeline would be 3-4 weeks shorter. In the case of Dr. Giraldo’s project, the antibody was developed and produced in 25 weeks.

Abyntek has been successfully completing a large number of projects for more than 10 years. Looking for a supplier of specific antibodies, proteins and bioreagents? Contact us!