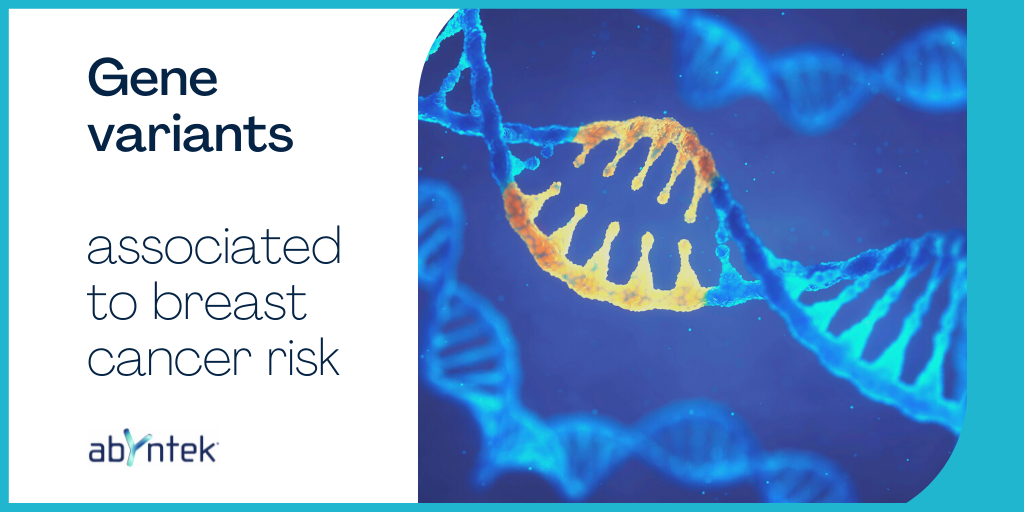 Breast Cancer is the most prevalent cancer for women in Spain with an estimate of 33.375 new cases diagnosed in 2021 (SEOM, Sociedad Española de Oncología Médica). A key measure to manage this disease has been the implementation of screening programs aiming to identify gene variants associated to breast cancer.

Genetic testing to assess cancer susceptibility in those individuals with a strong cancer history together with periodic mammographic or MRI-based screening, has increased the number of cases detected at an early stage thereby improving the survival rates.

In this post we review the main gene variants associated to breast cancer risk and the conclusions of the most recent studies in this area.

The germline pathogenic variants usually investigated in women with a family history of breast or ovarian cancer are those within BRCA1 and BRCA2 genes and other cancer susceptibility genes.

However, because most of the studies evaluating these pathogenic variants and their associated risks are based on high-risk populations, there is still no consensus regarding the set of gene variants associated to breast cancer risk and its subtypes in the general population.  Two studies published in The New England Journal of Medicine have shed light into this question by investigating in large and unbiased cohorts the association between germline mutations within putative cancer susceptibility genes and the risk of developing breast cancer.

In one of the studies conducted by the Breast Cancer Association Consortium (BCAC), the germline DNA of 60,466 women with breast cancer and 53,461 controls was sequenced to investigate a panel of 34 known and putative breast cancer risk genes (Dorling et al. 2021). The other study by the Cancer Risk Estimates Related to Susceptibility (CARRIERS) analysed 28 cancer predisposition genes in 32,247 individuals with breast cancer and 32,544 controls(Hu et al. 2021). Both studies systematically investigated gene variants associated to breast cancer risk in general as well as their association to each tumour subtype.

The results from both studies were highly consistent:

The fact that both studies relied on large and unbiased cohorts allowed to estimate more accurately the prevalence of the investigated gene variants and their associated risk in the general population.

For instance, in the population-based analysis conducted in the CARRIERS study, the prevalence of the pathogenic variants associated with higher and moderate risk (located within BRCA1, BRCA2, PALB2, CHEK2, ATM, BARD1, RAD51C and RAD51D) was 4.82% among case patients and 1,52% among controls. These estimates and their associated risk will help to make informed decisions regarding the necessity of screening for pathogenic variants among the general population.

The BCAC study also investigated the absolute breast cancer risk for carriers of variants located within the main 8 genes throughout a lifetime (up to 80 years of age). As shown in Figure 1, for carriers of BRCA1, BRCA2 and PALB2 variants by age 80, they have an absolute risk for developing cancer, higher than 30%.

While both studies provide insights that will be useful to implement a more accurate risk assessment in the general population, there are still open questions that will require further investigation. For instance, different variants within the same susceptibility gene may be associated to different risk (Liang 2021). Additionally, other factors including genetic-related (such as race), environmental (smoking) or lifestyle (alcohol consumption) should be incorporated to establish more reliable breast cancer risk models.