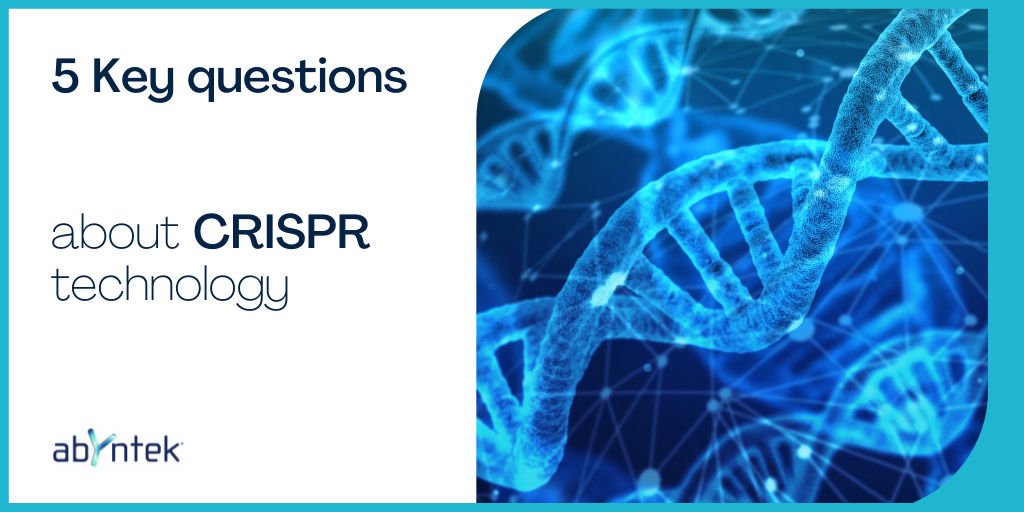 CRISPR technology has become a game-changer in the field of genome editing. In the last decade, the numbers of applications have increased exponentially and labs from all around the word are making use of this technology to address their scientific questions.

If you want to know more about where does this technology come from, how does the system work, its applications and much more, have a look at our new post!

1. What is CRISPR and where does it come from?

It refers to repetitive DNA sequences with ´spacer´ DNA sequence that were observed in bacteria and match viral sequences. It was later discovered that it constitutes the adaptive immune system of prokaryotes: they integrate short virus sequences in the CRISPR locus so that these elements can be transcribed upon viral infection to target the virus by cleaving their nucleic acids. This defence mechanism also requires the presence of CRISPR-associated (Cas) genes, which code for proteins that are essential of the immune response, thus it is referred to as CRISPR-Cas system. Different CRISPR-Cas systems have been described for different bacteria and archaea, and they differ in their components as well as in their mechanism of action. In the last decade, a variety of tools based on the CRISPR-Cas systems have been developed and are being used in genome editing with great specificity.

2. How does the CRISPR-Cas9 system work?

The first CRISPR system that was engineered for its application in genome editing for mammalian cells is that of Streptococcus Pyogenes. It comprises the nuclease Cas9 which can generate a blunt double strand break (DSB) following DNA target recognition. To be guided to the specific sites of the genome, Cas9 forms a complex with a CRISPR RNA (crRNA) and a pair of trans-activating CRISPR RNAs (tracrRNAs) that facilitate ribonucleoprotein complex formation. These RNA molecules have been engineered into a single guide RNA (sgRNA) to facilitate genome editing applications. The sgRNA is designed to contain a 20-nucleotide long sequence that pairs with the DNA target sequence. Of note, the CRISPR-Cas systems also require a short sequence, known as the protospacer-adjacent motif (PAM) to be present near the target DNA site. For the CRISPR-Cas9 system the PAM sequence (5´ to 3´) is NGG, where N represents any nucleotide. Other naturally occurring CRISPR systems rely on additional Cas9 orthologues that can recognize different PAM sequences thereby expanding the choice of target sites. Upon DNA target recognition Cas9 cleaves the DNA few base pairs upstream of the PAM sequence. The DSB that is generated will trigger a DNA damage response to stimulate repair by various mechanisms that can be harnessed for genome editing.

3. What are the CRISPR-Cas9 applications in gene editing?

Based on the repair mechanism described above, the following precise genomic alterations can be made:

While HDR-mediated repair of DSBs can be used to introduce point mutations, it also has some limitations. Firstly, is not efficient in post-mitotic cells and secondly, the introduction of DSBs might result in off-target mutagenesis. To overcome this, tools have been developed based on a Cas9 nickase (Cas9n), which is a variant of Cas9 engineered so that it only cleaves one of the DNA strands. Fusing Cas9n to a single stranded DNA deaminase enzyme, two main classes of base editors have been developed:

In both cases the Cas9n localizes the ssDNA deaminase enzyme to a particular target sequence, allowing the introduction of single nucleotide changes without generating DSBs.

5. How do I plan my CRISPR experiment? Where do I start?

In the last decade numerous CRISPR-based tools have been developed, giving researchers multiple options to conduct gene editing. Thus, when designing your CRISPR experiment, one of the main things to take into consideration is the type of modification desired. This will determine which are the most suitable CRISPR reagents. Below we describe the steps of things to take into consideration:

Are you thinking about using CRISPR but you are unsure as to where to start? At Abyntek we would be thrilled to hear about your projects and help you out with the strategy and choice of reagents! Don´t hesitate to contact us for more information.