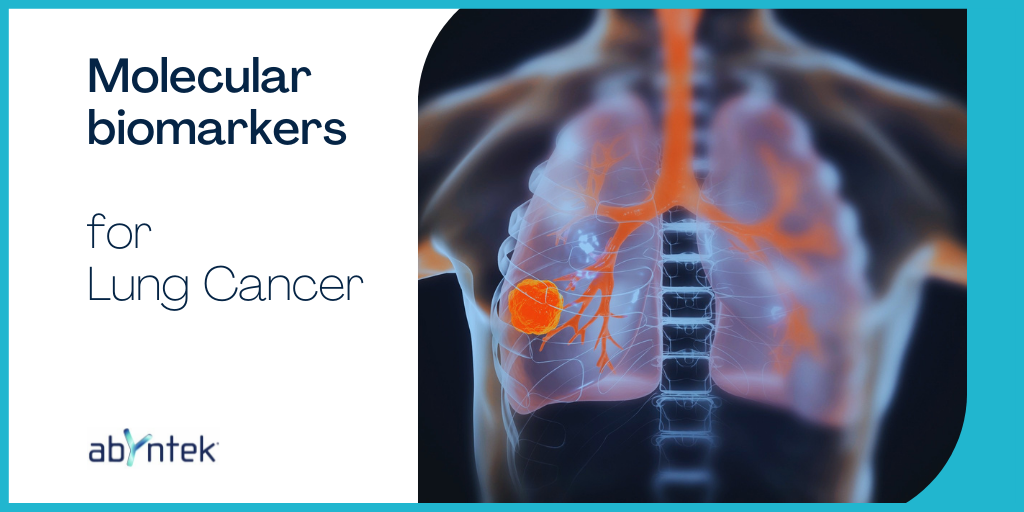 Lung cancer is (LC) is the leading cause of cancer mortality worldwide, being responsible for 20.3% of cancer-related deaths in Spain (SEOM, Spanish Society of Medical Oncology).

It is thought that 90% of lung cancer deaths can be attributed to smoking. Thus, current evidence supports lung cancer screening with low dose-computed tomography (CT) for individuals that are at high risk based on their age and for how long they have smoked. While CT has high sensitivity, its specificity for lung cancer detection is low and this can result in an elevated number of false-positive risking overdiagnosis.

The development of robust molecular biomarkers for lung cancer that would allow us to identify patients with lung cancer or potential malignant nodules is essential to complement current image-based screening and diagnose the disease at an early stage and predict response to immunotherapy.

In this post we analyze the main biomarkers and molecular landscape of non-small-cell lung cancer together with the predictive biomarkers for response to immunotherapy.

The increasing understanding of the molecular biology of lung cancer has led to the identification of potential molecular biomarkers for lung cancer, that are relevant at different stages. While biomarkers for LC screening are still a matter of intense investigation, biomarkers used to detect altered oncogenic drivers (such as EGFR or ALK) are routinely investigated in the clinic to select patients for targeted-based treatments.

The use of these targeted therapies has significantly improved survival in patients with non-small-cell lung cancer (NSCLC), a subtype accounting for 85% of LC. Of total NSCLC cases, adenocarcinoma subtype is the most prevalent (50-60% of cases) followed by squamous carcinoma (20-30%). Large cell carcinoma and other subtypes represent 10-20% of the cases. As shown in Figure 1, the most prevalent driver alterations that can be targeted therapeutically (EGFR, KRASG12C, ALK, RET, ROS1, BRAFV600E, HER2 and MET alterations) account for less than 25% of patients with NSCLC.

Thus, for the remaining of the patients with advanced or metastatic disease, various combinations of chemotherapy and immunotherapies are being evaluated in recent clinical trials or implemented in the clinic. Nevertheless, response to these therapies varies widely, with some patients showing long-term remission and others rapidly progressing. This highlights the importance of defining accurate molecular biomarkers for lung cancer to predict response to immunotherapy.

Predictive biomarkers for response to immunotherapy

In the last years, immunotherapy with immune checkpoint inhibitors (ICI) has provided substantial survival benefit in patients with no driver mutations. ICI with PD-1/PD-L1 blockade using monoclonal antibodies allows to restore T cell proliferation and production of effector molecules. CTLA-4 blockade, also used in clinical practice, enhances anti-cancer activity via various mechanisms. We describe below in vitro molecular biomarkers for lung cancer that are currently in use or under evaluation to predict response to ICIs:

While currently accurate ICIs biomarkers for response are lacking, we have described above an overview of those that are under investigation and have shown most promising results in preliminary studies. It is likely that by simultaneously evaluating several biomarkers, such as PD-L1 expression and tumour infiltrating lymphocytes, the predictive power would be improved.

At the same time, the clinical benefit could be enriched by incorporating in vivo biomarkers based on molecular imaging techniques. For instance, tumour metabolism evaluation by PET might have a potential predictive role for response. Altogether, while ICIs  has the potential to improve patient survival, it is key that we develop more reliable and accurate biomarkers that it will allow us to move towards more personalized treatments for NSCLC.

Liberini, Virginia et al. 2021. “NSCLC Biomarkers to Predict Response to Immunotherapy with Checkpoint Inhibitors  (ICI): From the Cells to In Vivo Images.” Cancers 13(18).