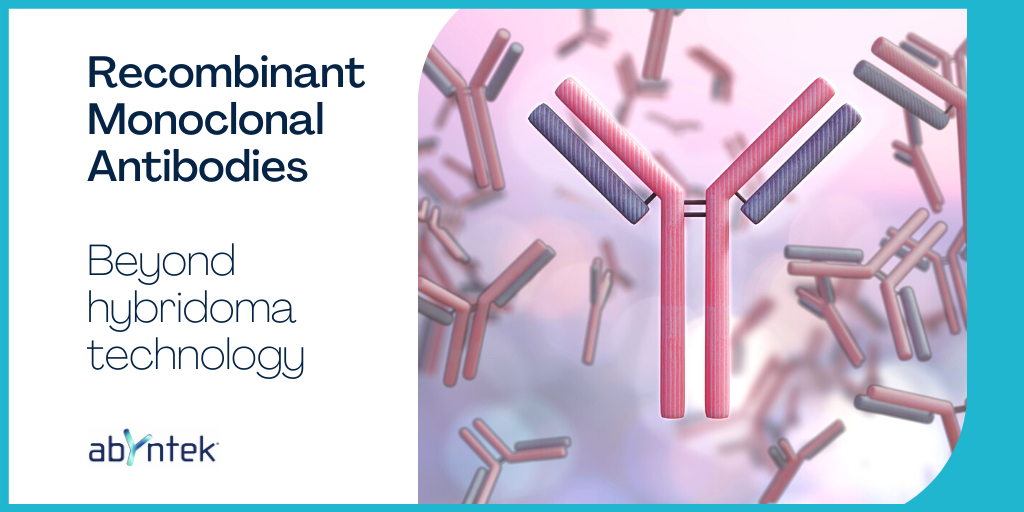 Monoclonal antibodies are homogeneous populations of antibodies that recognize the same epitope of a specific antigen. Monoclonal antibodies have traditionally been obtained using hybridoma technology. This method consists in the immunization of the animals with the antigen of interest, whose lymphocytes will produce the desired antibodies against the target protein. These lymphocytes are then fused with myeloma cells, obtaining an immortalized cell line known as a hybridoma. Finally, these hybridomas are subcloned to stabilize them.

Although hybridoma technology continues to be one of the main techniques for the generation of monoclonal antibodies, there are cases in which this method has limitations such as the difficulty of obtaining monoclonal antibodies against toxic substances or highly conserved antigens.

In this post we analyze 5 types of recombinant monoclonal antibodies that complement hybridoma technology by using recombinant DNA technology.

Broadly speaking, recombinant monoclonal antibodies are produced by in vitro cloning. Genes for the heavy and light chains of an antibody are inserted into an expression vector that is transfected into the host cell for recombinant expression in cell culture.

This confers several advantages over monoclonal antibodies obtained by hybridoma technology, such as:

Here we go over the main types of recombinant monoclonal antibodies:

Recombinant monoclonal antibodies differ from those obtained by hybridoma technology mainly by being based on plasmids rather than coming from natural immunoglobulin genes. In this way, both sequences and vectors can be optimized to obtain higher levels of specificity, sensitivity or stability, or to increase the levels of antibody expression.

ScFv are fusion proteins formed by the variable regions of the heavy and light chains fused in a structure of approximately 27 kDa to form a single protein capable of recognizing the target antigen. ScFv have a disadvantage as they generally have a lower affinity for the target protein compared to whole antibodies.

Nanobodies are recombinant monoclonal antibodies derived from camelids such as the llama, alpaca, or camel. Specifically, they are the variable heavy chain fragment of heavy chain camelid antibodies.

They are obtained by isolating RNA from blood mononuclear cells after immunization of animals with the antigen of interest with which a phage library is constructed. After selecting the antibody fragments with the highest affinity, they are sequenced and recombinantly expressed.

Fab fragments consist of the light chain and the part of the heavy chain that is connected to it through a disulfide bond. These fragments can be obtained by recombinant production, although they can also be obtained by proteolysis from a complete monoclonal antibody.