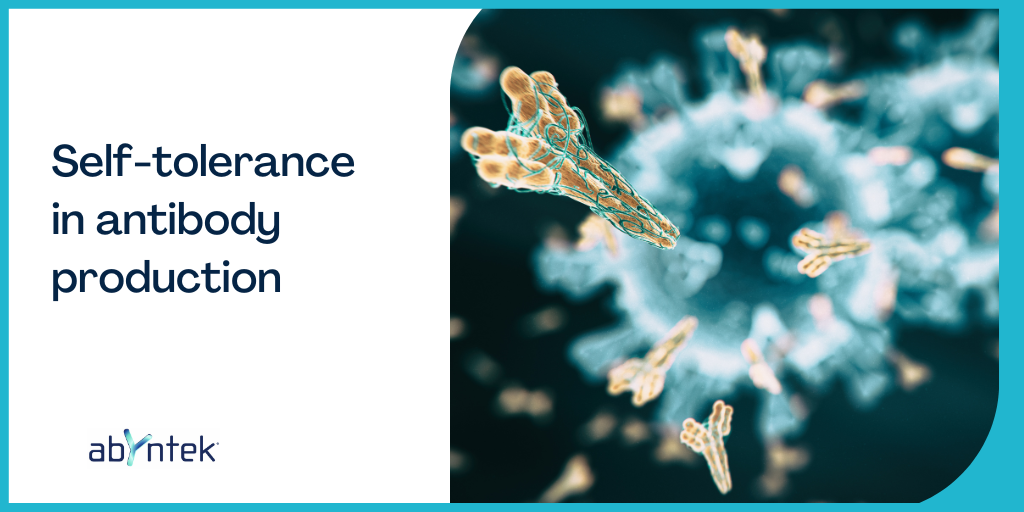 Immune tolerance is defined as the tolerance that the immune system presents against molecules of the organism itself. It is capable of recognizing these molecules as its own, not developing a response against them.

This mechanism is fundamental to avoid immunological reactions against self-antigens or against innocuous antigens, generally environmental, that should not be recognized as immunogenic.

Immune tolerance is a highly important issue in medicine, because when it fails, autoimmunity occurs and autoimmune diseases arise.

However, it should also be taken into account in other situations such as antibody production, being a real challenge.

Discover our customized antibody production service covering from the design and synthesis of the antigens to the production of monoclonal and polyclonal antibodies.

To generate antibodies in organisms in vivo, the most commonly used animal species are mouse, rat and rabbit. In general, the homologies between them, and also humans, might be relatively high, depending on the target antigen. It is therefore of importance to doublecheck potential homologies between the organism carrying the antigen, and the organism in which the antibodies are going to be produced.

On the other hand, there are proprietary mechanisms to avoid immune tolerance, for example, by using immunomodulators to allow B cells to generate high-quality antibodies.

In this blog article, we will focus on self-immunotolerance, in order to understand how to solve it.

In order to defend itself against potentially harmful external agents such as pathogens, lymphocytes play a very important role in the immune system. As lymphocytes develop, receptor sequences are randomly generated by recombination and pairing of immunoglobulin heavy and light chains. This indiscriminate approach results in such a diverse array of receptors that a substantial fraction of them can bind endogenous antigens. This action causes a self-recognition of its own molecules as foreign, thus triggering an immune response. Therefore, control of lymphocytes is crucial in maintaining homeostasis.

Within cellular homeostasis, the control of lymphocytes or lymphocyte tolerance is carried out through a screening system by checkpoints, called self-tolerance. At these checkpoints, cells detected as reactive are shed by apoptosis.

Checkpoint regulation, or self-tolerance, is carried out by two different mechanisms. Central tolerance occurs in the lymphocyte maturation organ, the thymus for T cells, and in the bone marrow for B cells. The second, peripheral tolerance, occurs at the site of antigen recognition.

Detection of T cells is critical, as these cells have the ability to further differentiate into cytotoxic lymphocytes (CTLs). This type of cell has the ability to directly eliminate cells that recognizes through its own receptor (TCR). Central T cell tolerance is controlled in the thymus during the stage of cell maturation. During this process, T lymphocytes differentiate into CD4 or CD8, cell differentiation markers that allow them to join the major histocompatibility complex 1 or 2 (MHCI or MHCII), respectively. At this stage there is a positive selection of differentiated lymphocytes.

In addition, there is another checkpoint, in which a negative selection is made based on the recognition of the autoantigen receptor. Cortical epithelial cells of the thymus present autoantigens to CD4+ and CD8+ T cells. Mature T cells that strongly bind to autoantigens are removed by apoptosis. On the other hand, T cells that bind to self MHC antigens will become T regulatory cells (Tregs). These regulatory T cells play an important role in controlling peripheral tolerance since, despite rigorous selection criteria in the thymus, some autoreactive T cells may escape detection and migrate.

New studies have shown that there are not only Treg cells generated in the thymus. But also, there is an additional population of Treg cells generated in the periphery. Although the mechanism is not yet fully understood, both populations have been shown to inactivate autoreactive T cells through the surface-expressed suppressor CD25 and inhibitory cytokines, IL-10 or TGFβ. Furthermore, surface receptors can exchange the auto-reactivity of effector T cells towards non-reactivity. Specifically, activation of the programmed death receptor 1 (PD-1) and its ligands PD-L1 and PD-L2, as well as cytotoxic T lymphocyte-associated protein 4 (CTLA-4) induce this resting state. Finally, autoreactive T cells can be killed by apoptosis in the periphery, induced by the Fas death receptor and upregulation of its cognate ligand, FasL.

The first checkpoint for B cells occurs in the bone marrow, at the time when lymphocytes begin to express immunoglobulins on their outer membrane. Thus, B cells that react to autoantigens through their cellular receptor (BCR) are eliminated and do not progress to the periphery. In addition, apart from the immediate elimination, at this checkpoint the receptor can also be edited so that the avidity for self-reactivity decreases. If receptor rearrangement is unsuccessful, autoreactive B cells will be removed by apoptosis.

However, there is a possibility that some B cells escape checkpoints in the bone marrow and travel to the periphery. To control this, there is the second checkpoint.

Understanding how immune checkpoints work naturally is essential to manage them in our favor. Trigger the immune response Acting to recognize as endogenous self-antigens is not only useful when producing antibodies, but is also important in the development of cancer therapies. In this field, self-tolerance modulation is used for the development of therapeutic interventions that activate low-affinity T cells, for example.