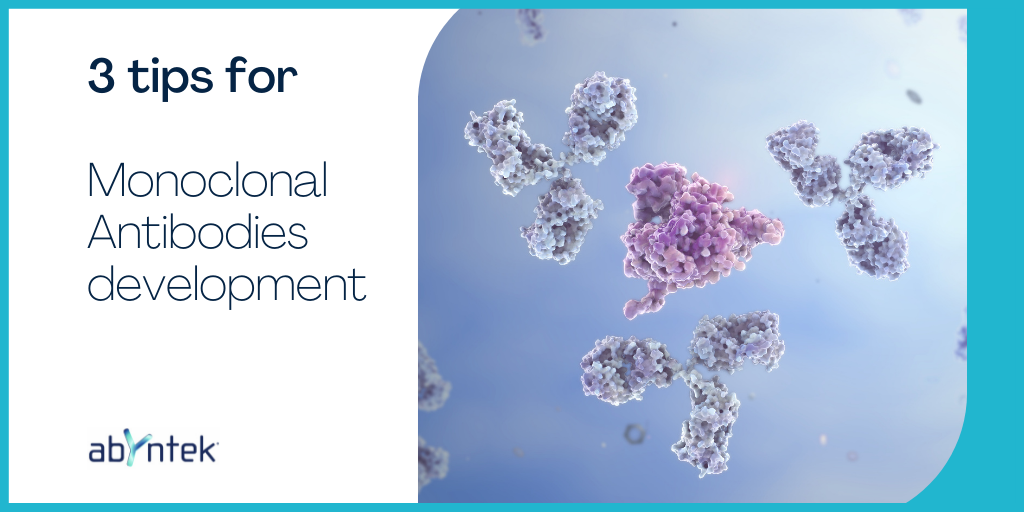 Virtually all scientists use monoclonal antibodies in their research today. The process of monoclonal antibody production begins with immunization of animals with a purified protein or peptide. The spleen from the best-responding animals will then be used for hybridoma fusion. The parental cell lines generated will be subject to limiting dilutions to obtain daughter cell lines with clonal origin.  The last steps consist in the purification of the antibodies present in the supernatant of the cell lines.

1. Antigen immunogenicity: which antigen to use?

Antigen immunogenicity is defined as the ability of an antigen to provoke an immune response. Thus, choosing well which antigen to use for the monoclonal antibody development is essential.

One thing that needs to be taken into consideration is the nature of your target molecule. As a general rule, three factors play a major role:

(1) Foreignness, to avoid that the antigen is recognized by the immune system as ´self´

(2) High molecular weight (MW), as those antigens with a MW below 1000, are not immunogenic

(3) Some degree of complexity is a better trigger for an immune response.

Additionally, some macromolecules are more immunogenic than others. For instance, lipids or nucleic acids are usually not immunogenic, unless conjugated to a carrier protein. The same applies to carbohydrates, with the exception of those that have a complex structure or are linked to a protein (glycoproteins). Given their structural complexity, proteins tend to be strong immunogens. A key aspect to take into account when using a protein for immunization is its purity, as small contamination (with bacterial antigens) might be immunodominant. In other words, the antibodies generated will predominantly be against the contaminant instead of against the desired protein.

When it comes to antigen selection for development of an antibody against a target protein, one can also use a peptide instead of a protein. The use of a peptide is recommended when your target protein is highly similar to other proteins, or difficult to express or purify. Using a peptide is also the preferred option for developing antibodies against particular post translational modification (PMT) as the number of potential epitopes available are reduced. Additionally, using a peptide as antigen reduces the cost and is quicker than using a protein. Nevertheless, one of the major limitations of using antigen peptides is that they generate antibodies that only recognize linear epitopes.

On the other hand, using proteins as antigen will induce antibodies against multiple epitopes, some of which might be conformational in nature rather than linear. Thus, anti-protein antibodies will generally perform better in immunohistochemistry and immunofluorescence applications. The caveat is that using a full-length protein might result in non-specific cross-reactivity with proteins that might contain homologous epitopes.

2. Immunization with peptide antigens: what should I know?

If you have decided to use a peptide for immunization there are few things you should consider to optimise the choice of peptide and immunization strategy. Sophisticated logarithms have been developed to evaluate various factors that can influence peptide immunogenicity. Here we summarize a few of them:

A decision should be made with regards to which animal species should be used for immunization. In this regard, there are few considerations to take into account. The presence of homologous proteins in that species will increase the chance of the antigen being recognized as `self´ precluding antibody generation.

Additionally, the age of the animals also plays a role in the generation of the immune response, as young adults elicit more robust immune responses than their older counterparts. Because, of this, generally 6-week-old mice and 8-week-old rabbits are used.

The injection protocol should also be designed carefully. In this regard, there are few points to consider: